A couple of days ago, the clever bods at VMware Labs released a new fling that allows you to migrate from a Windows-based vCenter Server to the vCenter Server Appliance: https://labs.vmware.com/flings/vcs-to-vcva-converter

This is a great Fling idea as a lot of end-users are now considering the vCSA given the enhancements made to it in 5.5! (BTW, vCSA has been further enhanced in vSphere 6.0!!!)
Check out my previous blog article on the subject……

Anyways, one of the problems in the past was how would a customer go about migrating data from their old Windows-based vCenter Server onto the new Linux-based vCenter Server Appliance!
Previously I’ve had to ensure that the customer was aware that moving to the appliance means they can’t migrate over their vCenter Server data – and the majority of the time they’re happy to bite the bullet and do a fresh install!

Having used the Fling to migrate my lab vCenter Server to the appliance, I can say that it works pretty well! The Fling migrates the vCenter database, roles, permissions, privileges, certificates and inventory service… It even migrates events/tasks lists, folders, vApp settings and pretty much anything that’s stored in the VCDB! The only thing it didn’t do was migrate the SSO configurations which has to be setup manually (pretty simple to re-do).

There are some limitations though (this is not the full list):

Diagram to visualise the migration process: 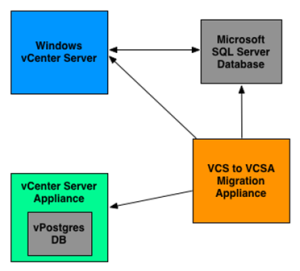 TBH, the one thing the documentation doesn’t mention is whether it migrates Distributed vSwitches, and having played around and used the Fling, I’m happy to say that it looks like it does as I could view and manage the dvSwitch on the vCSA after migration (although if I’m honest I haven’t delved into all the nitty-gritty configs you can do with a dVS).

I found the process pretty simple to follow, deploy a vCSA, ensure it is configured with the same IP and hostname as the old vCenter Server, fire up the migration appliance and follow the wizard!

The only issue I encountered was when trying to configure the Active Directory settings during the vCSA configuration wizard and I got the following error:

This was easily rectified by changing the hostname of the vCSA to the FQDN and checking the DNS entry is correct as outlined in this VMware KB: http://kb.vmware.com/kb/2062610

Once this was sorted, the migration was quite pain-free……. this is one great Fling, and I hope they continue to work on it and enhance it!! Well done VMware engineers!!