So this blog post has been a bit late coming, mainly due to me coming back from Barcelona with a heavy chest infection and cold… and when you’re sick, you tend to procrastinate alot… =)
Looks like all the excessive late nights, early morning starts, long days, freezing cold breakout rooms (was anyone else cold??) and lack of sleep really took it’s toll on me…. not to mention having to entertain all the customers MTI took out to VMworld this year! Such a hard life I live…. =)

We had a mad 1st day as Monday 11th Sept was Catalonia day and a huge demonstration was planned with demonstrators forming a large X along Carrer de Arago and Passeig de Gracia! The big problem was our hotel was smack bang in the middle of the intersection of the X…. nightmare getting to the hotel, our taxi dropped us off 2km away as there was a huge cordon around the demonstration! What an experience!

It’s a bit strange to be in Barcelona in September when it’s still warm outside… we had some really lovely sunny days…. but to be honest I think the weather was lost on most VMworld attendees as we were all too busy running around the conference centre trying to squeeze in lunch, trips to the solution exchange and all our breakout sessions!

As usual, the layout of the conference centre was annoying…. breakout sessions in hall 8 are miles away from where the solution exchange and VMVillage/Hangspace/HOLs are! I was clocking over 15000 steps a day just walking back and forth between hall 6, 7 and 8! This year they moved Registration over to hall 6 rather than have it by hall 8… totally confusing every VMworld Europe Alumni! =)

I wonder why they don’t use Hall 5 for breakout sessions? I guess maybe it’s because Hall 8 is the only hall that can be split into several rooms??

One thing I did like was the “Expert Bar” where attendees were able to have roundtable sessions with some VMware experts… it was very well laid out, much better than previous years!

This year was the 10th VMworld being held in Europe and we were told during the 1st day general session by Pat Gelsinger that it was the biggest VMworld yet – over 11,000 people attending. This may explain why the conference was laid out as it was…. the solution exchange definitely looked a lot bigger!

Before I go into my wrap up, I have to give a shout out to the new VMTN community programs and especially to Katie Bradley (VMTN Community Manager) and Elsa Mayer, (VMware Blog Program Manager)…. they were kind enough to pass me my VMware vSphere vExpert goodie bag and also explain about the new BlogBeats Program and help me register my blog on the VMTN community! I actually think this is a great initiative for the VMware community, it will also help drive traffic to bloggers who might be a bit on the lazy side (ie…. me!)…. keep up the good work ladies!! =)

It was also nice (if a bit awkward at times) to be recognised as a blogger by a number of attendees as well as vendors within the Solution Exchange… first time that’s happened to me since I started blogging! It’s a shame I was unable to make it to the vExpert party, unfortunately I had too much happening on Tuesday, what with my company sponsoring the Trend Micro Party… Hopefully next year – although maybe there should be more vExpert gatherings organised for UK/London!

I’m not really going to say much about the General Sessions, mainly because as per usual it was a repeat of the US ones but with a little European twist to it (see my 2 previous blogs on the US General Sessions)…. Pat did mention the dreadful “GDPR” word and that companies can’t just rely on technology to make them GDPR compliant!
GDPR is one beast of a legal mandate…. nearly every customer I’ve spoken to has heard of GDPR but don’t know what it means! I’m not going to pretend I know everything about GDPR… to be honest I typically just refer people to my colleague – Andy Tang – who’s a GDPR Practitioner! =)
Anyways, VMware Radius has a decent article that talks about GDPR and Addressing Data Security Gaps with VMware…. go have a read!

The whole VR demo looked really cool…. imagine being able to manage your VMware datacentre via VR… picking up workloads and throwing them into different hosts or even into the cloud!! Anyways, it looks like Pat was having fun – and to think the hackathon guys built it in a matter of days… impressive!
It’s amazing what some of the community gets up to… like writing API calls to integrate Amazon’s Alexa with vCenter – William Lam and Cody De Arkland have some great blog articles and demos available (Cody even did a recent vBrownBag podcast on it)!

There was a few new announcements though… An improved Cloud Provider Program was announced to help VMware Cloud Provider partners expand their service offerings, enable simplistic workload migration, more efficient operations and improved automation. Of the 3 announcements, VMware HCX looked the most promising…. in summary:

VMware HCX looks like a promising piece of tech…. An integrated solution that helps customers to migrate workloads to the cloud – allowing seamless portability of applications and data between different versions of ESXi, whether on premise or between Clouds (as long as they run VMware)!
Customers have been telling VMware that it’s not just about building the infrastructure, but more importantly how  they can gain increased application mobility across multiple clouds. Businesses frequently struggle with the complexity of migrating old workloads, such as old versions of ESXi, to modern environments, be they internal or cloud-based – and this the problem that HCX is going to help solve. It’s like Cross-vCenter vMotion on Steroids, using the network overlay (NSX) to help connect on-premise, old environments to modern environments or to cloud!

At the moment only IBM Cloud and OVH have access to HCX, but I’m sure VMware will end up rolling it out to the rest of their VMware cloud partners!

TBH, I’m still waiting for the announcement of some super-duper CMP solution from VMware that will let me migrate my workloads between AWS, Azure, GCP or my on-prem datacentre… seamlessly…. now that would truly be “Cross-Cloud”…. I guess we’re still a few years away from such a cloud-agnostic solution!

I’m not going to breakdown all the sessions I attended, as previous years I got a slight slap on the wrist for posting up photos of slides which had “confidential” marked all over them… oops…. Plus so many key sessions are now available for playback on the VMworld website or via the Content Catalog: https://www.vmworld.com/en/europe/video/vmworld-on-demand.html
There’s even a load of videos on the VMworld TV youtube channel:
https://www.youtube.com/user/VMworldTV

It’s funny, but all the people who went back stage due to either winning the VMUG competition or the VMware Inclusion draw were all from the UK… How ironic!

TBH, I’m not a big Kaiser Chiefs fan…. but my colleague Andy was, so I brought him along as my plus one…. surprisingly they’re quite down-to-earth guys!

I do have to admit that this year’s VMworld party was one of the better ones I’ve been to (on par with 2015s party band – Fearless)… it was far busier and people actually stayed around and watched the performance… and many enjoyed it too!! 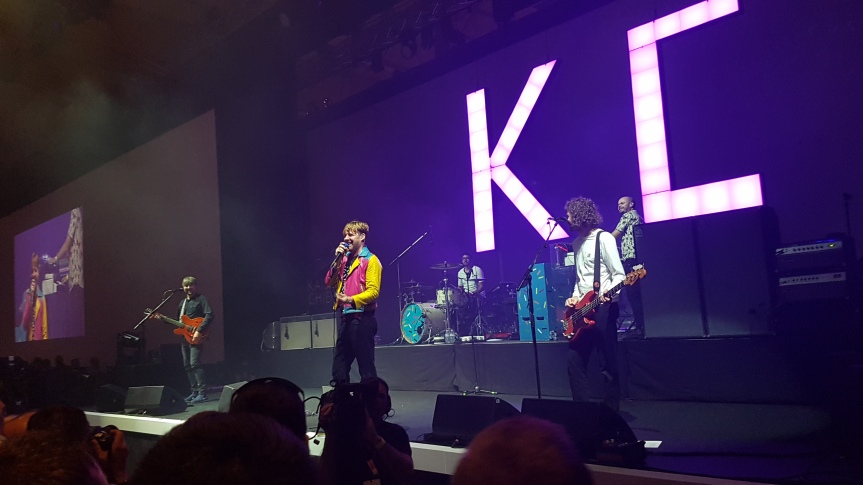 So to conclude…. it was another great VMworld…. the customers we took out all enjoyed themselves and learnt loads, and whilst the geek inside of me was hoping for more announcements I was satisfied with what I got out of the conference.

There’s a clear message coming out of VMware now, Hybrid Cloud is mainstream… it’s now possible to migrate workloads easily between clouds… containers are how the next generation of applications will be deployed (Cloud Native Apps/PKS)… It seems that the vision VMware started 2 years ago of “Any Device, Any Application, Any Cloud” is finally coming into fruition (albeit limited to just VMware or AWS Cloud at the moment).